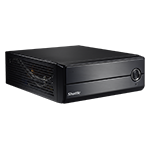 Equipped with an Intel® 100 series Chipset 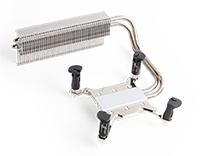 The XH170V features Shuttle’s exclusive heat pipe cooling module with smart fan design. The precise vent design allows for constant air circulation between the inside and outside of the machine, resulting in high stability and low noise for long-term operation.

The XH170V uses industrial capacitors in order to meet the environmental operation demands of commercial applications. Its rugged design allows for 24/7 stable operation over long periods of time – even in 50⁰C environments*.
* With use of SSD and Wide Range Temp. SODIMM

The XH170V supports installation of an optional 3.5” HDD rack for increased storage through purchase of PHD4 accessory.
*Note: Installation of ODD is not compatible with 3.5” HDD configuration.

The XH170V includes one M.2 2280/2260/2242 slot with type M and one half-size Mini PCIe slot to install an M.2 SSD, Wi-Fi card or other compatible devices, proving a strong expansion capacity.

The XH170V has built-in an Intel®10/100/1000 Mbps LAN interface and supports the Wake On LAN function and increased compatibility for business network environments. In addition, the XH170V can be set to sleep mode, rest mode, or when powered off remotely via the internet.

The XH170V features four USB3.0 and four USB 2.0 ports as well as one RS232 port designed for applications in a variety of industries for peripherals such as thermal printers, label printers bar code scanners and more. In addition, an adaptor can be used to convert RS232 to USB.

Approved for 24/7 operation, the system uses smart fan and heat-pipe technology to keep things cool for extended periods of operation.

The XH170V can accept BIOS settings to enable the RTC function that allows you to set a time to boot up the computer and to turn off with the Windows task scheduler. This feature means saving electricity and energy as well as eliminating the cost of on-site service.

Designed to blend seamlessly into home and workplace environments, the XH170V is able to be mounted on the rear of LCD monitors with an optional PV02 VESA mount accessory.