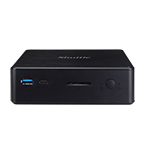 The XPC nano is Shuttle’s smallest product lines with only palm size. Shuttle’s new NC02U series is next generation of NC01U series with support Intel® Skylake-U platform technology. This series comes with a selection of processors ranging from Celeron, to the Core i7 and supports up to 32 GB of DDR3L 1600 low-voltage memory. With integrated HD graphics, the series is capable of playing 4K/Ultra HD content. Compared to NC01U series, NC02U series uses new mechanism design for easy installation of memory module and storage. This case can accommodate one 2.5” HDD (up to 15mm) to provide its more flexible storage capacity without volume limited. This series offers plenty of I/O ports in spite of its small size: HDMI, DisplayPort, USB3.0 (Type A*1, Type C*1), USB2.0, RS232, M.2 slot and Intel® Gigabit Ethernet as well as built-in 802.11 b/g/n wireless network. The NC02U series is VESA mount ready to make it easy to blend in anywhere: home, office, storefront, and more.

The NC02U series supports the new Intel® Skylake-U platform technology and provides a variety of CPU options of NC02U series, including Celeron® 3855U and Core™ i3/i5/i7 processors. The series features support for up to DDR3L-1600 32GB memory and built-in Intel® HD Graphics, able to deliver 4K video playback. 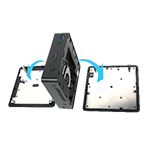 The NC02U series is designed for easy configuration. Users can simply open both upper and lower covers to easily install memory module, HDD, and other hardware components. 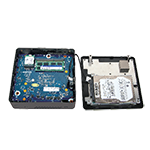 A variety of I/O for great connectivity

The NC02U series has all the functions you need from ultra SFF (small form factor). Connect with multiple peripherals via HDMI, DisplayPort, RS232, USB2.0 and USB3.0 as well as SD card reader. This series is the first Shuttle’s model with built-in USB 3.0 Type-C. Unlike older USB plugs, there’s no up or down orientation required so users can insert it either way for more convenience.

Made with Shuttle’s exclusive cooling technology and smart fan design, waste heat is quickly removed from the machine for stable and long-term operation.

The NC02U series uses high quality materials to meet the environmental operation demands of commercial applications. Its rugged design allows for stable operation over long periods of time – even in 40⁰C environments*.
* With use of SSD and Wide Range Temp. SODIMM

Designed to fit seamlessly into your lifestyle, the NC02U series is capable of mounting to the rear of LCD monitor or a TV. This space saving capability makes it easy to blends into anywhere, including home, any offices, and commercial environments.

Use BIOS to set up the Wake ON LAN function so that users can turn on the NC02U series – from the sleep mode, rest mode, or when powered off – via the internet.