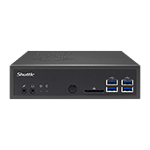 Robust 1.3-liter PC for AMD Ryzen APU with Socket AM4

Shuttle DA320 is the 1.3-liter slim PC designed with Socket AM4 for AMD desktop processors with integrated Radeon Vega graphics up to 65W. It allows for up to three displays via HDMI 2.0 and DisplayPort 1.4 and offers dual Gigabit-LAN, eight USB ports, and two COM ports. Its slim metal chassis comes with a VESA mount included, provides versatile connectivity, and reliable operation in environments with ambient temperatures of up to 50°C. The DA320 is targeted at professional applications such as Digital Signage, POS, POI, gambling machines, office, healthcare, and industry.

Up to Three Displays

The benefit of a triple monitor setup is a multitasking feature, which saves a lot of time in shifting screens constantly. The DA320 can control up to three screens via one HDMI 2.0 and two DisplayPort 1.4 interfaces for digital signage scenarios. One of the RS232 ports on the rear panel of DA320 can be replaced into the VGA interface via the accessory of PVG01 that makes a diversified signal selection.*Ryzen APUs come with up to triple displays support.
*Athlon APUs come with dual display support.

Measuring just 43mm in height, the DA320 still has room for versatile connectivity of six USB 3.2 Gen1, two USB 2.0, two RS232 and one SD Ver.3.01 card reader. It can be deployed with multiple peripherals to meet the application needs.

The DA320 features Shuttle’s exclusive heat-pipe cooling system with smart fan design. The clever ventilation design allows for constant air circulation between the inside and outside of the machine resulting in high stability and low noise for long-term operation.