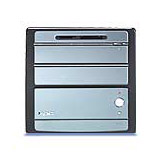 The innovation continues with the introduction of IntelR Matrix RAID Technology, which combines the benefits of RAID 0 performance and RAID 1 protection on two hard drives. For example, games and video editing benefit from improved performance, while valuable personal photos and financial records can be better protected from a drive failure.

Delivering significant improvements over previous generation integrated audio and sound cards. 7.1- channel audio is capable of delivering the support and sound quality for up to eight channels at 192 kHz/32- bit quality,while the AC'97 specification can only support six channels at 48 kHz/20-bit. In addition, Intel HD Audio is architected to prevent the occasional glitches or pops that other audio solutions can have by providing dedicated system bandwidth for critical audio functions.